The Nov. 30 edition of The Labor Forum on WRFG 89.3FM, 4-5pm every Monday, hears the latest on the struggle of Peoplestown residents to save their homes.  Activists Alison Johnson and Tanya Washington talk about the relationship between their fight to preserve their homes and the redevelopment of Turner Field and gentrification of working class, African American neighborhoods. On Dec. 1, they and other concerned community members will be meeting with Atlanta Mayor Kasim Reed.This interview will take place between 4:15 and 4:30pm.
At 4:30, The Labor Forum is happy to introduce Ayana Dunlap-Bell who is  helping young workers develop their leadership skills on the job and in the community. She is joining The Labor Forum team and will be preparing a regularly scheduled segment called “Spotlight on Young Workers.” Ayana is a former MARTA worker and currently works for the Atlanta-N. Georgia Labor Council.
The Labor Forum is aired on 89.3FM, streamed at www.wrfg.org, available on the station’s app for mobile devices and can be viewed live on The Labor Forum’s YouTube channel. Past programs are also archived in audio and video formats there.
For additional information, please see www.wrfglaborforum.org and like our Facebook page and join our Twitter.

Comments Off on WRFG Labor Forum Program on Monday, Nov 30

The Labor Forum examines the fightback against the two-tier wage system imposed by major corporations during the economic crisis in the mid-2000’s.
First, from Sheboygan, Wi, where members of UAW #833 went on strike Nov. 15 over the failure of the Kohler Company to negotiate a fair contract. One of the central issues is the existence of a two-tier wage system that keeps new hires at poverty wages. Union leader, David Boucher will be calling The Labor Forum at 4:15pm to talk about Local 833’s history and current struggle for worker rights.
From 4:30-5pm, Chrysler worker, Martha Gravatt will provide an overview of the contracts negotiated with the Big 3 auto makers where once again a major source of contention is the continued existence of two-tier wage systems that threatens union solidarity.
The Labor Forum airs on WRFG 89.3FM every Monday from 4-5pm. It can also be accessed online at www.wrg.org and on WRFG’s mobile App. The Labor Forum Youtube channel archives all programs in video and audio formats.
For more information, please see www.wrfglaborforum.org 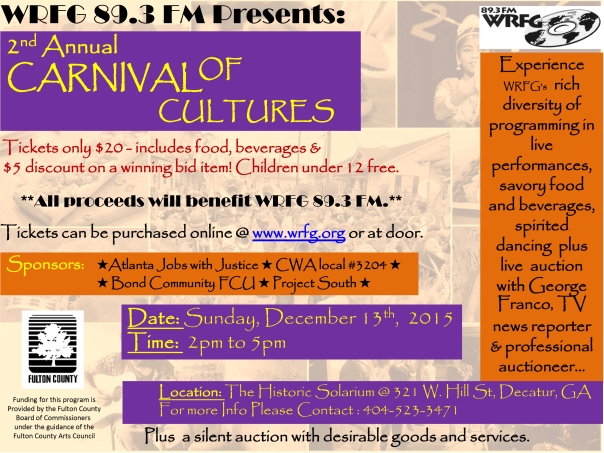 On Monday, Nov. 16,The Labor Forum on WRFG 89.3FM speaks with Burlington, VT UE Local #203 President, Elizabeth Nikazmerad about the union’s response to KKK literature recently left on the doorsteps of local Black workers. In addition to organizing a downtown march of over 200 on Nov. 5 to publicly denounce the racist organization, she will explain why they are putting together a Workers Defense Guard to prevent any harm to their members and community. This interview will take place from 4:15-4:30pm.

In the second half hour of the program, Abdul Rasjid Mannon will recount some of the contributions of labor historian, Cliff Kuhn to the development of WRFG 89.3FM. Kuhn who died last week from a massive heart attack hosted the first labor show on WRFG, served as the president of the station’s Board of Directors and was a noted professor of history at GSU. For many years, every month he conducted a downtown walking tour of sites identified with the 1906 Atlanta Race Riot.

The Labor Forum airs every Monday from 4-5pm at 89.3, is streamed online at http://www.wrfg.org, and is available on the station’s App. Also the program can be seen on The Labor Forum YouTube Channel where an archive of previous programs can be found.

Comments Off on WRFG LABOR FORUM on Monday, Nov 16

The guests for the Nov. 9 Labor Forum include Gregg Fann and Tabitha Hicks from AFSCME  to speak about their campaign to win a $15 minimum wage for city and county employees.
The National Fight for $15 and a Union day of action is Tuesday, Nov. 10. In Atlanta, the rally will be held at City Hall
at 5pm.They will be on from 4:15-4:30pm.

The guest for the second half of the program from 4:30-5pm is Traci Drummond, archivist at the GSU Southern Labor Archives
who will provide our listeners with information about the value of the archives for today’s struggles.

The Labor Forum airs from 4-5pm every Monday on WRFG 89.3FM.

Comments Off on WRFG LABOR FORUM PROGRAM on Monday, Nov 9 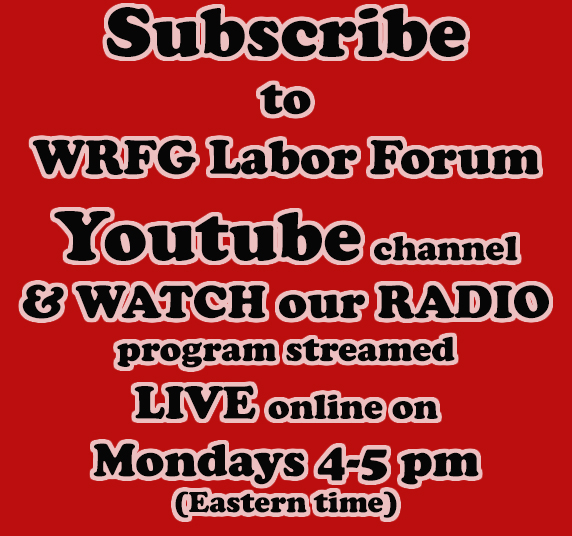